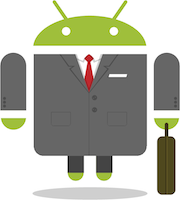 For those rare occasions when you need your phone to actually work as a phone.
Downloads | Installation | Upgrading | Changelog | Development | Forum | About

Initial installation of Blandroid on your device requires unlocking your device's bootloader, flashing the Blandroid images, and optionally installing the proprietary Google applications/services. Unfortunately, this process requires that all of your user data be erased, including your settings, applications, WiFi passwords, and possibly even all of the photos and data on your SD card (or the internal memory that the Nexus S presents as /sdcard). It is important that you backup all of your data first to a separate SD card or your computer.

This initial installation process may seem a bit lengthy and technical, but once you have installed Blandroid, upgrades to new versions can be done on the phone itself without using a computer and you will not have to erase any of your settings.

To be able to flash a different build of Android such as Blandroid onto your device, you will first need to unlock its bootloader. If you have already done this, you can proceed to flashing Blandroid.

Due to security concerns with flashing a different version of Android, your data will be automatically erased once you unlock the bootloader, so backup your data first. This may include erasing your SD card (or what the Nexus S mounts as /sdcard) so backup everything to your computer. This process may void your warranty, and on the Nexus One, the process is irreversible. On the Nexus S, the bootloader can (and should) be re-locked.

On AOSP-supported devices like the Nexus One and Nexus S, unlocking is very simple:

Now that your bootloader is unlocked, you can flash a new firmware image.

This method of installing Blandroid will only have to be done once. After this initial installation, upgrades can be done from the device itself.

Congratulations! You have successfully upgraded your phone to Blandroid.

Note: This step is only applicable to the Nexus S GSM and 4G phones. The Nexus One does not support re-locking.

Once you have flashed Blandroid onto your device, it is a good security practice to re-lock the bootloader. This will prevent others from being able to flash a different build of Android onto your phone with fastboot without first erasing all of the phone's data (by issuing another fastboot oem unlock). This restriction does not apply to updates downloaded to your device and applied through the recovery tool or through Blandroid's system update mechanism.

With USB debugging disabled, a lock-screen PIN code set, and a secured recovery image (note that Blandroid does not currently have a secure recovery image), a locked bootloader can reduce the chances of your device's data being read if the device is lost or stolen. (Advanced data recovery techniques or security vulnerabilities present in Android/Linux can bypass these security measures.)

To re-lock the bootloader after flashing Blandroid:

Your device's bootloader is now re-locked. It will no longer be possible to flash images with fastboot without unlocking the bootloader again, which will erase all of your device's data.

After you have installed Blandroid and either restored your previously backed up settings or reconfigured everything to your liking, it is recommended that you create a full "nandroid" backup of the system. This is a full backup of the entire system and can be restored at any time in the future to return the entire system to exactly how it is now, even if you revert back to a stock ROM or get an entirely new phone.

Because Blandroid comes with the Superuser utility, you can also run applications that require root privileges like Titanium Backup, which can create per-application backups on schedules you define from within Android.